One of the questions I get from people is about special techniques.
To be honest, it’s not easy to explain on the web, though I’ve been asked to do so.
I’m not even sure my writing skills are up to the task…

Portamento is played in a way that connects the first note to the last note. As for wind instruments, trombone is one of my favorites. It’s a little different from glissando. To master this, you’ll have to wait until you’re in advanced lip control before you can try it.

In the sample, the first solo from Gershwin’s Rhapsody in Blue, originally the clarinet, was played by I’m working on it. There’s a portamento after the first trill (which is kind of a one-shot thing, though, and not very practical. ). After that, I kind of connected the two notes with portamento. I often use the portamento technique of about 3 to 5 degrees in saxophone playing.

It’s an applied technique for portamento, and I guess it’s called this when it’s used in the fragio range. Eric Mariensal often uses this technique on his alto saxophone.

The flutter is often heard on flutes and the like, where you roll your tongue in the manner of a curling tongue, tulle tulle tulle tulle. Blow like this. Then you can hear the sound cut into small pieces. The sample is an imitation of the flutter used for the sound effects in a famous Japanese TV show.

Glowl, as the name suggests, is a “growl” technique.
It is a low, growling sound in the throat, like a dog threatening you. This is often required on tenor saxophone recordings, and is also required on rock saxophone Technique. Practicing throat clearing without an instrument in your mouth will not give you much of a chance to practice, so blowing the instrument and Try throttling while you do it. For the first time, I think you should start with the higher lash of the octave key.
You can play it like a fierce dog.
It’s like a Chihuahua or some small dog. I’m not going to sing a song, lol.
The way the notes are broken depends on the pitch of the grunt, so try to get used to it and practice breaking the notes more smoothly.

It’s not a special technique for popular saxophone.
In the notation, the beginning of a note is marked with an “X” or with a “♪”.
In most cases, however, half-tangling is not notated, so you’ll need to listen carefully to reproduce it yourself.

First of all, I would like to say that in saxophone, double tangling should not be possible for amateurs!

It’s not a special technique for wind instruments other than saxophone, such as flute, but it’s a necessary technique.

In this song, when the tangling is designated for a series of 16th notes, you should start playing at about this tempo. I also use double tangling. Of course, I also use single tangling in conjunction with it.

If you want this score, you can download it from the article below.
“Badinerie サックスの譜面作りました。“

circulatory respiration ※Explained in Japanese only 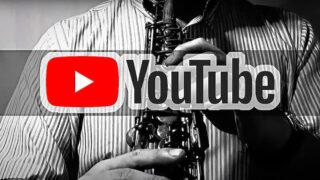